A vasectomy is a safe, permanent method of birth control and the most effective form of contraception for men. While vasectomies are reversible, they are typically recommended for men who have decided that their families are complete or have chosen not to have children. A vasectomy allows you to continue having intercourse without interference to your sex drive or performance.

Vasectomy and its reversal procedure are some of the most common surgical procedures performed at Colin Teo Urology. 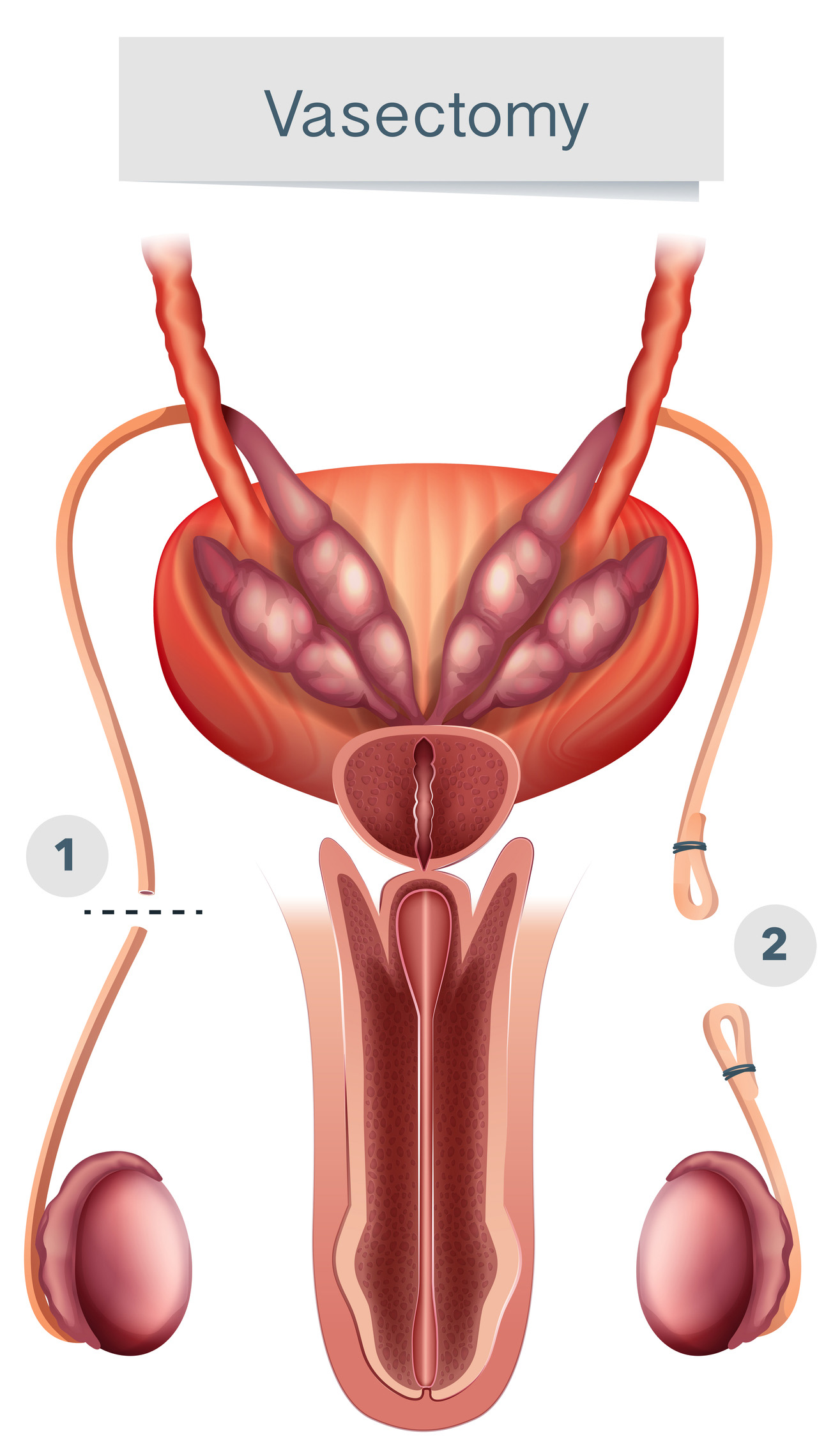 How is Vasectomy Performed?

A vasectomy prevents the release of sperm into the ejaculate by blocking the vas deferens duct, which transports sperm from the testicles to the seminal vesicles, where the sperm is stored until orgasm and ejaculation.

During a vasectomy, your surgeon will create a single opening in the scrotal skin overlying the vas deferens. A segment of the vas deferens is removed, the ends are cauterised, and a small clip is placed to prevent a new tunnel from forming. The vas deferens is returned to the scrotum, and a dressing is placed over the incision. The day procedure takes 15-20 minutes and is done under local anaesthesia, requiring just one to two days of recovery and rest from strenuous activities.

Most patients have only a small amount of bruising. The swelling usually subsides in a week and is easily controlled by anti-inflammatories.

You will not be sterile immediately following a vasectomy. It can take 3-6 months for the sperm to clear from the ejaculate. The more times a patient ejaculates in the three months following the procedure, the more likely it is that they will be clear on checking. Patients are advised to produce two semen samples, one week apart, three months post-surgery. If these show no sperm in them, the patient can then be considered sterile. If the samples are not clear, they are repeated monthly until they are.

Your sexual performance, such as having an erection, ejaculate, and the volume of ejaculate should not be affected by having a vasectomy. Although vasectomy is reliable, it is not foolproof. The risk is rare, and in a small number of men, the tubes may re-join spontaneously, and sperm may appear in the ejaculate.

Should a Vasectomy be Done?

Vasectomy is considered a permanent sterilisation procedure. While it can often be reversed, the decision to have a vasectomy should not be made assuming that it can be reversed—because reversal can be a complicated surgical procedure.

If you are uncertain about fathering children in the future, are under 30, have very young children, or have experienced any pain in the testes previously, further consideration should be given to the decision.

If you are sure that your family is complete, your relationship is strong, you want to take responsibility for the prevention of pregnancy, and you want to be free of the need to use birth control, then a vasectomy may be right for you.

There are many reasons to undo a vasectomy. You might remarry after a breakup or have a change of heart. Or you might want to start a family over after the loss of a loved one.

Vasectomy reversal is an operation performed to re-join the severed tubes to restore continuity to the tubes and allow sperm to flow into the ejaculate again.

The success of the operation also depends on the length of time that has elapsed since the vasectomy. Sperm returns to the semen faster and pregnancy rates are highest when the reversal is done sooner after the vasectomy.

How is Vasectomy Reversal Performed?

A vasectomy reversal is a much more complex procedure and is always performed under general anaesthesia. The ends are re-joined under magnification, using an operating microscope, to allow the accurate placement of the very fine stitches.

Your urologist will make a small cut on each side of the scrotum, trim the scarred ends of the vas where they were closed by the vasectomy, and take fluid from the vasal end closest to the testis to check if it has sperm in it.

If there is sperm in the vasal fluid, it shows that the path is clear between the testis and where the vas was cut. This means the ends of the vas can be joined. The term for reconnecting the ends of the vas is "vasovasostomy". If there is no sperm in the vasal fluid, your urologist will need to go around the block and join the upper end of the vas to the epididymis instead. This is called a "vasoepididymostomy", and it serves the same purpose as vasovasostomy.

Healing should be fairly quick and easy. Pain after surgery is most often controlled with pills. Most men can return to their normal routine and light work within a week. You will be told to take it easy and not have sex for 2 to 3 weeks.

Sperm often appear in the semen within a few months after a vasovasostomy. It may take from 3 to 15 months after a vasoepididymostomy. Next to pregnancy, testing the sperm count is the only way to tell if the surgery worked. Your urologist will test your semen every 2 to 3 months until your sperm count holds steady or your partner gets pregnant.

If the reversal works, you should stay fertile for many years. Only 5% of men later get scars in the reconnected part, blocking the outflow of sperm all over again.

Why should you choose Dr Colin Teo to perform your Vasectomy & Reversal Surgery?

Dr Colin Teo is the Founding Head of Khoo Teck Puat Hospital’s Urology Department, with years of experience in minimally invasive keyhole surgery, operating with precision surgical techniques. Many fellows have trained under his mentorship. He did a Fellowship in EndoLaparoscopy and Andrology at St James’ Hospital in Leeds, UK and was sponsored for a Senior Healthcare Medical Development Program (HMDP) in Advanced Laparoscopic and Robotic Surgery at University of Southern California (USC) Keck Hospital in Los Angeles, USA.

Dr Teo is the President of the Society for Men’s Health. He has been performing vasectomies and reversal surgeries for many years and provides attentive and personal peri-operative care with his dedicated clinical team to ensure an optimal recovery outcome for his patients.

If you have enquiries about vasectomy and its reversal surgeries, or your suitability for the procedure, drop us a note. We will be happy to offer our professional advice. Contact us to book a vasectomy or vasectomy reversal consultation with Colin Teo Urology today.